No items found.
Product is not available in this quantity.
Copyright © 2020-2021 Beyond Extent. All rights reserved. 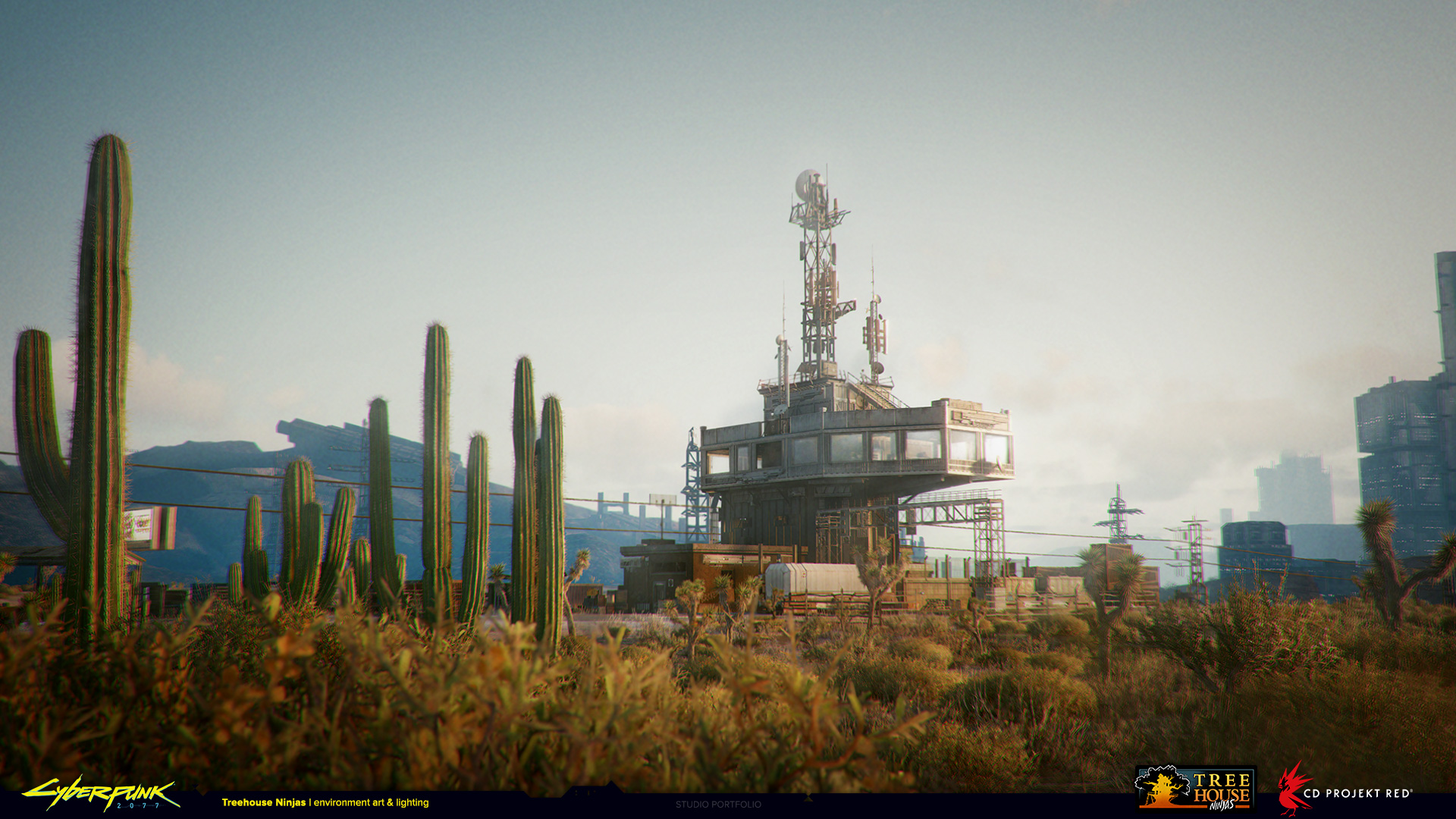 Welcome to Beyond Extent, can you give us an introduction about yourself first?

Hey! Thanks guys for having me, it’s a pleasure, and congratulations for your work on Beyond Extent so far.
To keep it turbo-short: I’ve been around the globe for the past two decades between game industry, vfx industry and animation industry, eventually supervising and art directing, but formerly covering many roles, most often spawning from lookdev/lighting and environment/generalist positions that would degenerate wildly into all sort of acrobatic creative and technical teamwide problem solving.

‍
After a number of experiences at some leading studios on super-hyped titles and franchises, I packed all the experience gathered up to that point, moved back to Europe, and co-founded my own studio: Treehouse Ninjas.

You’ve got a lot of experience under your belt, how does this influence the work you do as a Creative Director at Treehouse Ninjas?

It makes professional empathy easy to happen. After you’ve been around, extending the boundaries of your comfort zone for years and years, on many different projects, at many different levels, starting from the middle of nowhere all the way to being side by side with the best professionals that the different industries can offer, the collected scars are so many that whenever a member of a team I’m directly leading is going through any struggle, it’s quite unlikely I won’t feel like I’ve been exactly there already. This perspective has made all the difference for me.

Given your experience in movies, what are the most important things you learned from working within real-time environments?

That when the camera is not locked by a director, but it’s in the hands of the player instead, things get tricky. This at least is true if you want to have a story delivered. Non-linear storytelling is still an open question mark, and certainly making a visual statement without controlling it from a fixed POV does make your brain work exponentially harder. To any ‘movie person’ I would recommend taking this challenge at least once.

Also, the interaction with people coming from a long background in videogames opened my eyes onto different creative mindsets. When facing complex tasks, in games it’s more common to proceed by lining up all the pieces of the puzzle, make them as ordered and clear as possible and, with those, aim at the final product; in movies it’s more common to take the final product itself, slice it into smaller pieces, and work those out. By itself it might sound like a trivial difference, but it creates two very different creative mindsets: you can feel different mind frames when brainstorming with other people or solving problems together. I mean it in a good, constructive way.

If you had to put it into words, how do you create a cinematic feel in video games? Is there a workflow that we can learn from?

It’s a multi-departmental challenge. I don’t think anybody has found an ultimate answer to this yet. Having a hierarchy of paths, organized by importance, is one good way to start, to prioritize certain angles. Proper depth layering is extremely important for the player to gauge the environment, and that can only come from efficient coordination of environment design and lighting. Flatness is deadly.

Also deadly: the environment department and character department not closely orchestrating the color work. Env+Char+Light must be in full harmony, there’s no other way. Strictly same color range spectra, coordinated palettes, and only intentional accents. It takes as little as a character with black boots walking on a white floor to enter the danger zone.

In general: more awareness towards the global visuals, how things come together, a more gestalt-oriented approach, and less tension towards ultra-detailed prop assets with over-sharpened textures, which are only good for portfolio turntables on a limbo background.
I’d say having an art direction and supervisory team that includes at least a few people from the movie industry makes a huge difference today.

Now, let’s zoom out to the future of the industry. What excites you the most about the convergence of video games and movies?

The chance for refreshing contents, not just ‘better movies’ or ‘better video games’, but new approaches to interactive storytelling that really make the most of modern tech.
I think there is a spiral of innovations that already started in many ways and will bring to completely new contents, and new ways of creating them. Virtual production in movies is just the beginning, more story-driven games, hybrid/interactive storytelling experiences (immersive and non-immersive),decentralized production models, improved remote teamwork, the metaverse, the omniverse, or cultural developments like having gender variety in the gaming community and western countries stopping to consider animation as for-kids-only content. A lot of energizing facts coming together.

What are the big roadblocks you can see from this convergence and how do we overcome them?

Technically speaking: battery engineering. I have faith in AR goggles, they’re the real future of virtual production and entertainment in general, however they’re not practical enough as they require enough power without being intrusive. But more and more improvements in the field of battery engineering are being made these years so we’ll get there.

‍
Creatively speaking: production costs. Too much money and layered middlemanship is involved in making the big products, this makes the system stiff and reluctant towards taking risks and creating refreshing contents. But with modern tools becoming easier and easier, many of which are even open source, and decentralized agile production (and distribution) models, the power is slowly shifting towards the smaller content creators, the brave ones. So, it will be good.

What will the impact be on storytelling in both media?

I’ll try to hit this fast as it would require an article on its own, in my 2019 talk The Convergence of Games & Movies I exposed my thoughts on this. The point is that I think content creators of today should enjoy this question to stay as a question for now, and experiment, inspire each other. What I personally look forward to is new formats: immersive short movies, episodic mini games, movies that the player can step inside of and interact with, games that the player can use to tell custom-made stories, and so on. Above everything: emergent storytelling (see the talk for more about this!).There have been many attempts at these things already, and some were just unsuccessful, but each one of these attempts, even when it fails as a product, can spark new ideas and motivate other creators to do better, to roll the dice again. It’s a spiral, it needs to develop more, but that’s the exciting part.

What do you think are going to be the biggest game changers for environment artists working in the Games Industry in the near future?

Virtualized geometry, physically plausible real time global illumination and real time path tracing. These things change everything. It’s a bit early to talk about USD in games but that too will be big, I think. The work that Nvidia and Epic have done (collaborating with several other industry developers) opens a new chapter, with faster and easier ways of working. All things that make solid artistic skills more and more crucial, and specific software knowledge less and less of a factor, changing the workforce at its core, deprecating old challenges and posing brand new ones into the recruitment and mentoring of the new generations.

How do artists (especially working in games) make the most of this convergence of games and films?

I believe the most impactful and immediate takeaway of the videogame workforce meeting the movie workforce is project-wide color management awareness. Cinematography and story-driven plausible lighting in games is becoming a common ingredient now, but just a few years ago it used to oscillate from very forgiving to non-existing.
We see things improving today and I really think that’s a result of people moving in and out of the two industries, sharing the knowhow.

Color can be very confusing because in so many situations we cannot just trust our eyes looking at a screen, we need to learn how to deal with color numerically, that’s the only way to control consistency between Env+Char+Light departments, when projects are huge and complex. Might sound like a picky thing, but it’s vital, especially in real time.

Thank you so much for sharing this amazing article with us Mauro, is there anything you want to share with us to let us know where we can find you?

It’s been my pleasure, guys.
Have a look at www.treehouseninjas.com to know something more about us. We also keep our Artstation gallery well updated, and if you’d like to know about our current and future projects, stay tuned, we’ll be making new announcements on both Linkedin and Facebook.

All these resources are curated and made by artists and then made available through the help of all our supporters.
If you want to support us on our mission to make the your journey into environment art as easy as possible then you can do so by joining us, and we will give you a lovely community and more exclusive resources in return. 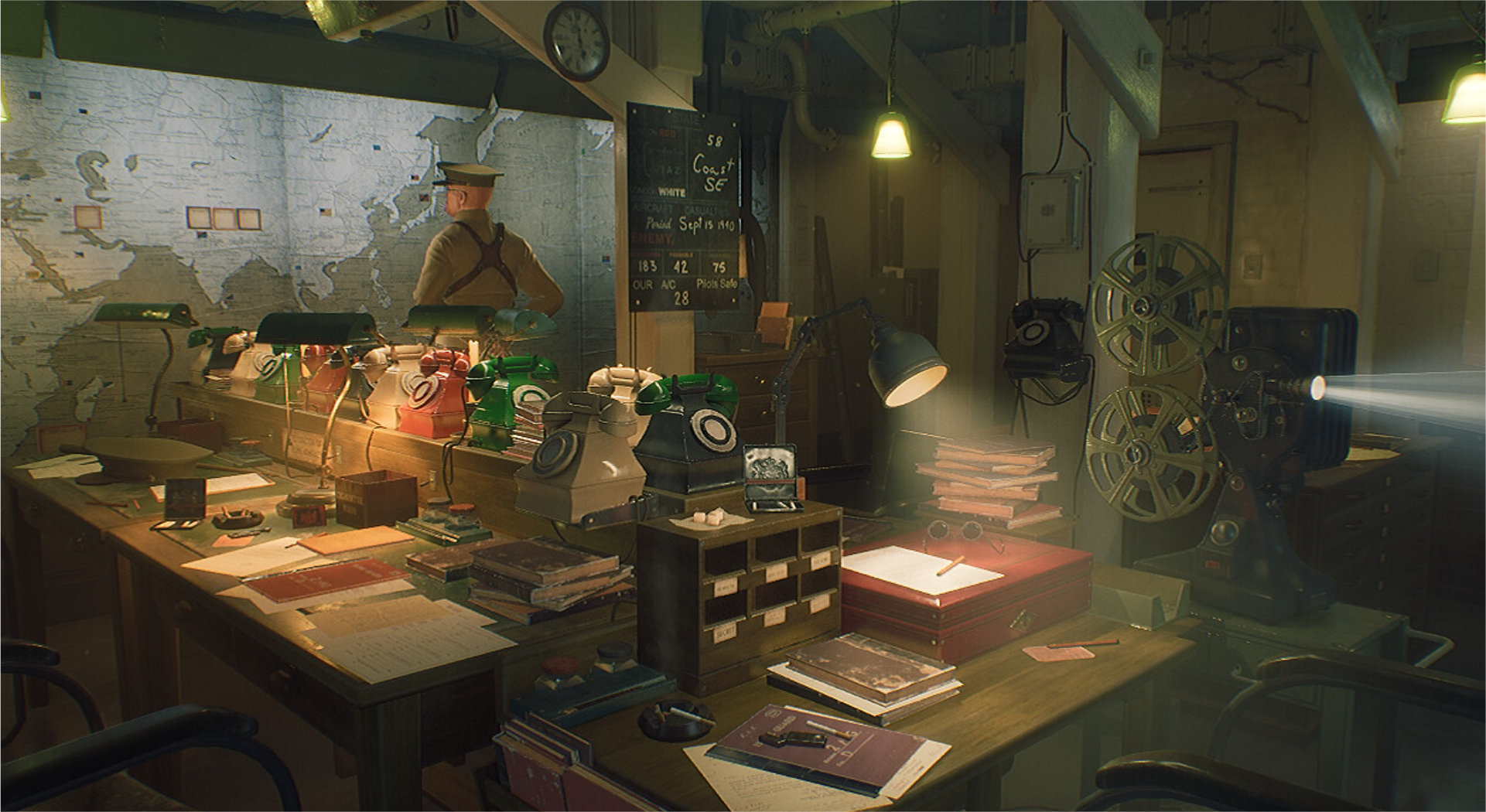 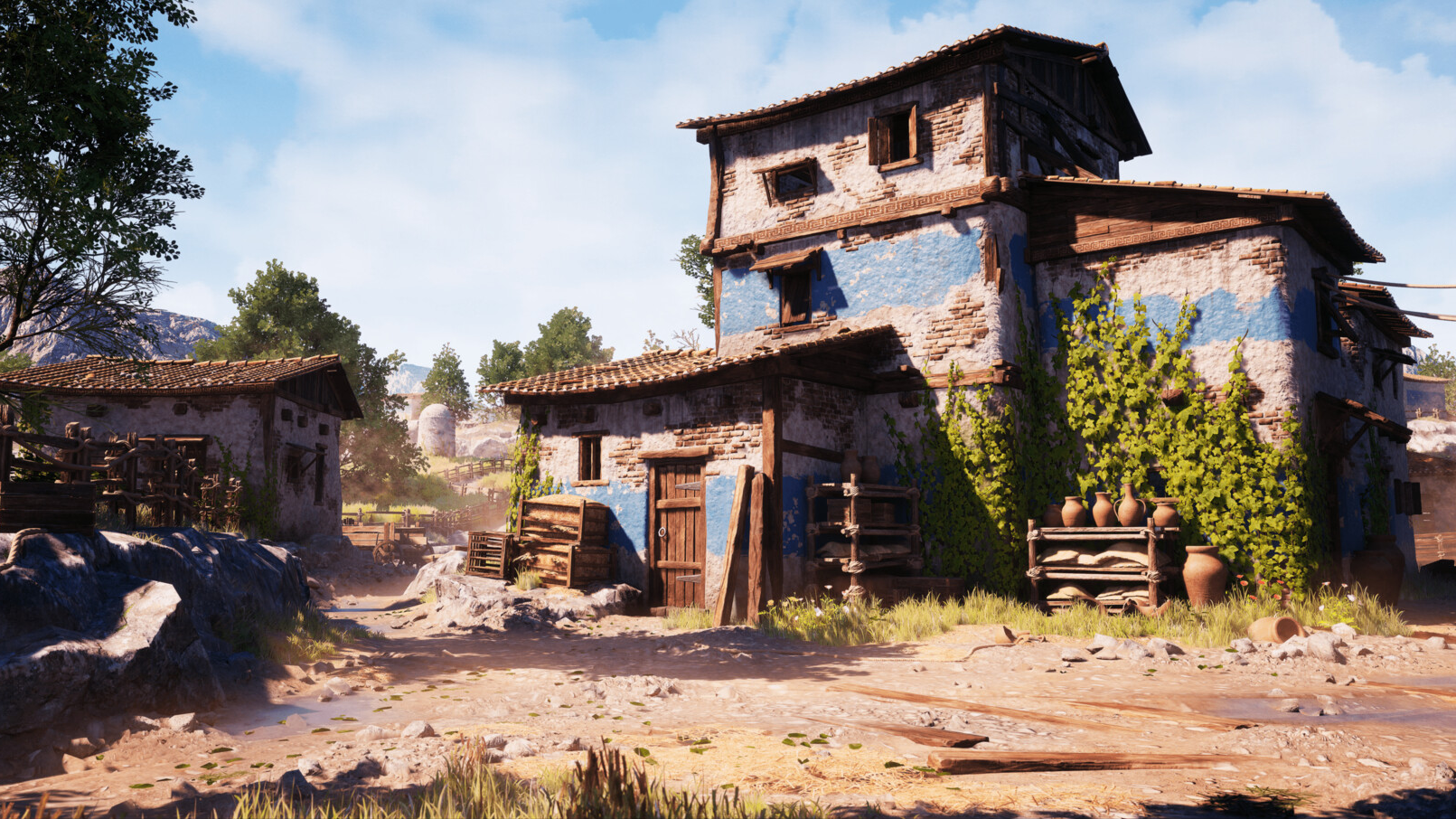 Art In A New Generation 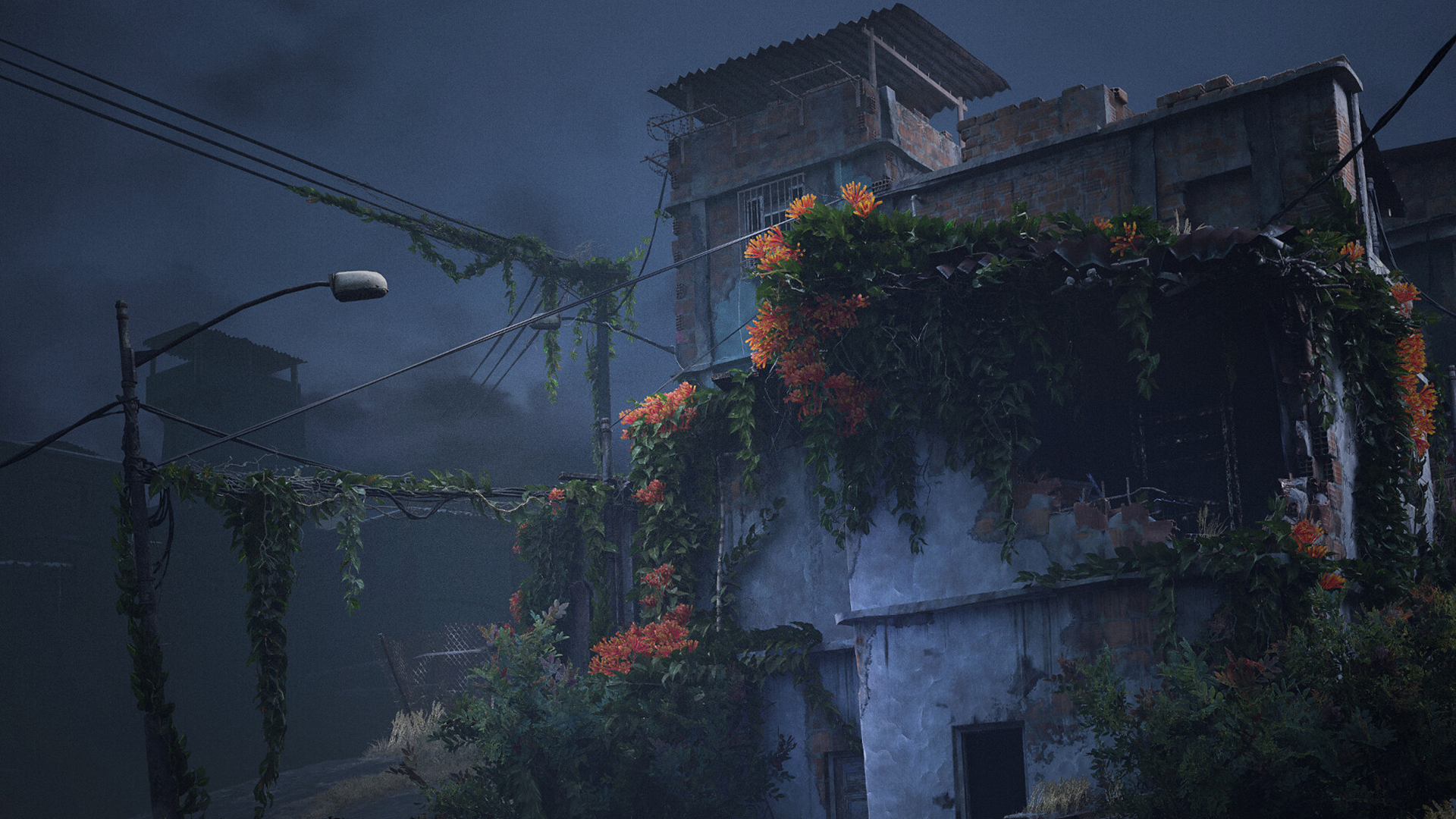 stay up to date

Thank you! Your submission has been received!
Oops! Something went wrong while submitting the form.